Sometimes having a bad race is a good thing.

At least that's how I prefer to look at it (they don't call me "Pollyanna" for nothing). Two weeks ago at Uwharrie 40, a number of factors created the perfect storm of a race for me, and despite conditions begging for a PR, I tanked and had to dial in the last 10 miles to miss breaking 8 hours by nine minutes. Afterwards, I took a good look at the things within my control that went awry, and came up with a new game plan for the Holiday Lake 50K++ today.

1. Recovery. I realized that I did not recover from Hellgate 100K as adequately as I had planned. I did too many long hard runs in January, including a tough run on a snow-covered MMT course just two weeks before Uwharrie (the snow covered the rocks but was tiring for the legs after 21 miles). I decided that to run a better race at Holiday Lake, I needed to rest up, so I ran very little during the past two weeks (a total of 5 easy, short runs). I feel great at age 45, but my body just needs more recovery than in the past!

2. Nutrition. At Uwharrie I had serious GI distress throughout that race (see my race report below). I suspected it was a combination of eating too much in the first 3.5 hours (5 servings of Hammergel and a bottle of SE, as well as a bottle of water and Nuun), temps that rose to the low 60s, and a shortage of electrolytes. By the last 10 miles, I was completely spent from GI issues and dehydration. For Holiday Lake, I had a gel every hour, a bottle of SE, and a bottle of Nuun for the entire race with no GI problems...and the temps never got above 45, which worked well for me. My thanks go out to Meredith Terranova for her great advice!!!

3. Mental Preparation and Focus. At Uwharrie I allowed myself to get taken out of my mental game plan once I started feeling crappy, and I was determined to stay tough at Holiday Lake if problems arose. I didn't want to race anyone except the clock, as I was hoping to run near my Holiday Lake PR from 2002 (5:17). After running the first 16-mile loop in 2:30, I was on track for a PR but had a typical bad patch around mile 20...and was pleased that with a walk-run routine and a few gels, I was able to rally. I finished in 5:22, feeling very strong and satisfied with my time. Most importantly, I ran my own race and didn't get caught up in running down anyone else, and as a result, I felt great at the end with nary a bonk in sight.

We had near perfect weather and conditions at Holiday Lake today, and the trail was dry and fast. As usual, David Horton and his volunteers did an excellent job catering to the runners, and once again I was impressed by the number of very fast women. In 2002, my time of 5:17 earned me 3rd place overall woman...this year, 5:22 was good enough for 13th!

Holiday Lake was my first ultra, and in 6 years of racing, I have realized that what I love most about ultras is that they always present a puzzle to be solved. When the pieces come together, it's an awesome feeling...and when they don't, it's all part of the plan!

Next up: ROAD TRIP on March 8 to Land Between The Lakes 60k to run with my dear friends Heidi and Michelle!!!
Posted by Sophie Speidel at 9:22 AM 1 comment:

A fine winter's run at Uwharrie 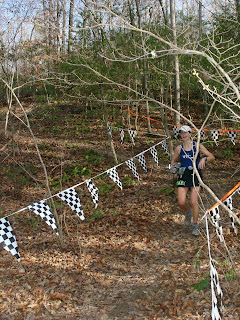 A number of VHTRCers and WVMTRers traveled to the Uwharrie 40 yesterday. We had spectacular weather (low of 32 at the start, high of 60 at the finish with clear skies), the challenging single track trail was relatively dry despite recent storms, and the event was, as usual, first-class. A special treat at the pre-race dinner was hearing a short history of the event from race founder Bob Boeder, whose books on his 1997 Grand Slam and Hardrock adventures were very inspirational to this newbie back in 2002.

I broke the elusive 8-hour mark in 2005 (7:47) and in 2007 (7:53), and was again shooting for that goal this year. I came into the race well-rested, and was feeling relaxed and comfortable with my pace, yet I found myself consistently 10 minutes behind last year's splits at each aid station. There were about 6 or 7 women ahead of me the entire race, and despite my best efforts on the climbs in the second half, I couldn't catch any of them. In addition, I found myself "scratching leaves" at least 4 times with GI distress...was it the heat? the Hammergel? The Nuun? Am I just getting too old to run fast? One thing is for sure: something was bugging my stomach and I think I will mix up my nutrition at Holiday Lake in two weeks.

Despite all the time I wasted making pit stops, I was very happy with my time (8:08) and I feel great today. The VHTRC men and women fared very well--Sean Andrish was first male, Brian Schmidt was second, and Jen Ragone, an accomplished Ironman, was third in her first 40 miler! I was very impressed with the number of women who broke 8 hours (5). Clearly, more fast women are taking up the sport, and it was fun to talk to and share the VHTRC team spirit with Jen and new member Alyssa Godesky (who almost broke 8:00 with just seconds to spare). Team and overall results are here. 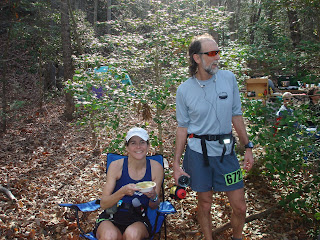 Here I am chilling with Dan Lehmann after the race. Dan is the founder of the WVMTR and the race director of Highland Sky 40, as well as being my trail buddy...we always run near one another in races. Bill Potts, another WVMTR elite, took these photos and crewed for us after he ran the Uwharrie 20 in some sick fast time. Thanks, Bill!

Now, onto recovery for Holiday Lake on February 16!
Posted by Sophie Speidel at 1:08 PM 4 comments: