The Grand Canyon R2R2R fell into my lap; Linda Wack emailed a group of friends a year ahead of our trip date of October 1 and basically told us she had made all the reservations and logistical plans, and that all we had to do was show up! And what an amazing trip that was. This photo was taken the night before our run, looking southwest from the North Rim Lodge balcony at sunset: 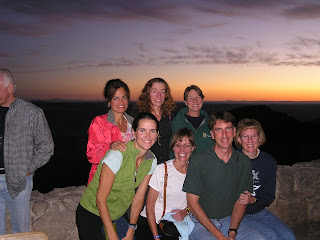 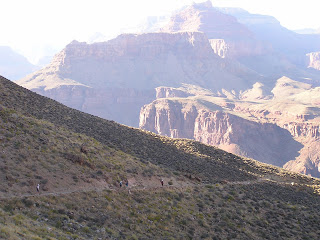 I took this photo as the gang ran down the South Kaibab Trail in the afternoon; we had successfully crossed to the South Rim via the Bright Angel Trail earlier in the day, eaten a hearty lunch at the Bright Angel Lodge, and were now on our way back to the North Rim via South Kaibab. I love this photo as it shows the immense scale of the Grand Canyon in a way that is hard to show with most photos. Needless to say, this was a trip of a lifetime, and I am so glad I accepted Linda's offer. Every ultrarunner should have a R2R2R crossing on their bucket list!

The following summer, a large Blue Train group was fortunate to get into the Western States 100 via the lottery. Nowadays it is virtually impossible to get into WS solo, forget about a group! 2006 was called the "hot year" which means it was 75 at the start at Squaw Valley, 110 degrees in the canyons halfway through the race, and 95 degrees at sunrise in Auburn on the second day. Despite these conditions, the VHTRC gang had a very high finishing rate (all but one of us made the cut-offs), Keith and Bryon won their age groups, and we had a total blast representing the East Coast on that sweet (some would even say, "candy ass") trail. WS remains as one of my favorite races, despite the heat, the blisters (oh, the blisters!!!), and the distance! Another bucket list item, for sure. Here are some fun pics: 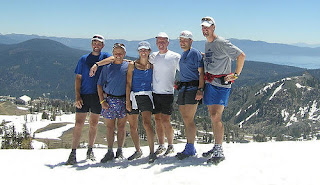 This photo sits on my desk at home, and is a constant reminder of why I love our sport: the friendships made through shared adventure, and the amazing beauty of the trails we explore. This photo shows Quatro, Gary, me, Scott Mills, Keith, and Scott Crabb on the Escarpment with Lake Tahoe in the background. We had hiked up the Thursday before the race to observe the WS tradition of the flag raising ceremony, and couldn't resist a group photo. I love how we are all wearing some sort of VHTRC Blue, totally unplanned :-) 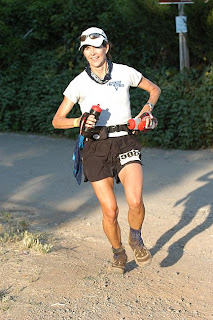 This photo makes me smile--it is so dated (love the throwback baggy shorts, hip belt, and handhelds)! I remember this moment exactly---I was coming into Michigan Bluff (mile 50) at 7:00pm, well behind my projected splits because of the heat. Yet, I was feeling good and really looking forward to seeing my crew--and to the sun going down. Rusty was crewing me along with Gretchen Garnett and he told me it was 100 degrees at 7:00 pm, really bad for crews as there was no shade to be found. I was sad that we had to cross the American River in boats that year. I would have given ANYTHING to have dunked myself in that cool water, but the snowmelt in the Sierras that year yielded high water downstream, so we had to cross by rowboat. It only took about thirty seconds, but it was tough to get in and out of the boat without cramping big time. Rusty really wants me to go back to WS, since he had a blast crewing and biking the Tahoe Rim Trail...but I think my next WS trip will be as a pacer, and I am crossing my fingers for my pals who plan to enter the WS lottery (again and again!).

Sadly, the family schedule in the summer months has not been conducive to any more summer Blue Train road trips for the past few years, and I really miss them. So this fall I decided to gather a group for a trek down to the Uwharrie Mountain Run 40. We had previously made the trip in 2005, and I had raced in 2007 and 2008 as well, and was eager to get back with a VHTRC team. Uwharrie is "MMT Lite"--technical, rocky trail with lots of ridge running until you run down to an AS, and then back up to the ridge-- so it is a tough challenge for a winter ultra. Since my racing schedule focuses on November-March, I knew I would be in good shape, but I also knew I would be cutting it close in terms of recovery from Hellgate.

I rode down with Rob Colenso and we met up with Keith Knipling, Tracy Dahl Knipling, Alan and Pam Gowen, Sean Andrish, and Beth Weisenborn at the pre-race dinner. The RDs, a young couple who own Bull City Running Company, did a great job and even made sure that our table got three grab bag prizes--two beer glasses and a free pair of trail shoes! 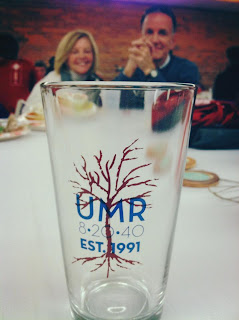 Keith, Sean, Rob, Tracy, Alan and I were running the 40, while Pam and Beth ran the 20. In the team competition, the top-5 places across all three races count, so we knew we would have our work cut out for us given the fact that many other teams had more runners in all three races. But it was a blast cheering for each other on the out and back sections of the 40, and many runners commented later how much they admire our club spirit and the races we put on. Hail!

It was a great day out on the Uwharrie Trail, and we got some hardware to prove it! Sean finished as 2nd male after taking some time off from racing--it was great to see him running so well. Keith looked solid as usual and he finished 4th. I was hoping to once again make it into the "Brain Dead Club" for women who finished in under 8:00--my previous bests were 7:47 in 2005 and 7:53 in 2007--but I had an energy lull mid-race that set me back a bit. I finished in 8:07, good enough for second female. Tracy finished her first 40 miler looking awesome in 9:36, and Rob PR'd by 15 minutes in 9:02. Alan, Pam and Beth all finished strong and we were able to take third in the team results, despite having the most runners scoring in the 40 miler. Woop!

After hanging around the fire ring at the finish eating and drinking soup and other frosty beverages, we gathered at the local BBQ joint for some real Carolina BBQ and sweet tea (no beer at this place...dry county?) It was a great way to celebrate another Blue Train adventure. Next year, we hope more friends will join us at Uwharrie--the entry process is still a work in progress, but hopefully the kinks will be worked out for 2013. Until then...Happy Trails!