I read this quote from Alan's Massanutten Mountain 100 report on Friday, the day before the Highland Sky 40. He captured the essence of MMT and ultrarunning so perfectly with these words, so I added them to "This I believe" on the right side of my blog page. And after Saturday's run through epic---EPIC--conditions of 40 mph winds, rushing, almost impassable river crossings, wading through shin-deep water and rocks for miles...I truly do believe it. The words "wind and water" kept coming back to me all day. It was a day that tested the novice and the experienced ultrarunner like no other.

This year was my fifth Highland Sky. I love Dan and Jody Lehmann, and all the WVMTR crew. They are good, good people and the VHTRC and WVMTR have a close bond. Many VHTRCers came to the race this year to support Dan and Jody and once again they put on a fantastic event. I was so happy to be able to run---my family schedule has been nuts this month but I was able to figure things out at the last minute. This is probably a good race strategy for me because I was feeling very mellow about the race, using it as a gauge for my Grindstone training and I didn't really taper too much for it!

Short version: We had torrential rain the first two hours that created rivers on the trails, mud sucking bogs and slow running. As a result, I was about 20 minutes behind my usual pace by mile 10. I was totally fine with that and I believe the slow going set me up nicely for later. By mile 19, I needed to change into new socks since mine were sopping, muddy and filled with small stones...but for some stupid reason (perhaps being so mellow) I didn't plan for socks in the drop bag. Thankfully, Tony Escobar gave me some of his and I was a new woman! Thanks, Tony!! I left that AS with new energy and hammered the 7 mile road section. I felt better than I ever have on this section and made up a lot of time that I lost in the first half. I passed about 4 guys and continued to pass people through the Dolly Sods Wilderness, despite 40 mph winds---no joke!

At mile 32 AS, I came upon Michele Harmon as she was leaving. She was looking good and I was able to keep her in my sights for about a mile, and then when we started to climb the ski slope I caught her. We decided to run together and try to catch a few of the women ahead of us (according to Pam Gowen at the last AS, there were 5 women ahead of us). Michele had fallen early in the race and punctured her shin with a stick, and it was killing her, but she was still running well and we were able to pass one woman at the mile 36 AS. It was so much fun to have her company during those last miles...we hammered the roads (well, it felt like we were hammering...I think we were running 8:30s) and entered the last mile (a trail section) secure with a tie for 4th. We were running behind two guys and suddenly heard a woman's voice behind us and that was all the incentive we needed: "Excuse us, fellas, we need to go!" was all I was able to say as we passed the guys (who got the gist and quickly moved over to let us by--lord knows what I would have done if they didn't!). We scrambled up the final hill and locked hands for a strong finish, and, it turned out, a tie for third! The woman behind us, Mary Kries, had gone off course and had made up substantial time to almost catch us. We also discovered that the second place woman was only 1:10 ahead of us. Whew! It was a blast to be part of such a close finish! 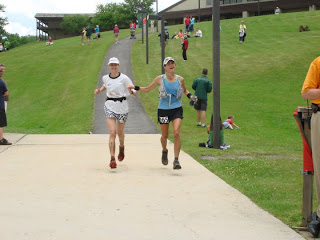 After the race, we sat by the finish line to cheer on the others. This race is sooo tough. It is a 40 miler that runs like a 50, and it throws everything at you---mud, water, roots, rocks, bogs, wind, asphalt, steep descents---and also provides glorious views of the wilds of West Virginia wilderness. Those who finish can walk away knowing they got a huge confidence boost --for future races, yes, but also for themselves. So many times I hear runners say they thought about dropping (and some do) but those who stick it out are rewarded with the knowledge that if one can finish Highland Sky 40, a tough 50 or 100K is a real possibility!

For me, Highland Sky 09 will be remembered for the satisfaction that came from being patient in the first half and letting the race unfold. Unlike previous years, I didn't force it. I took my time, forgot about previous years splits, and just ran. I laughed out loud at the absurdity of the mud and muck and water. But I will also remember the pleasure that came from running with two strong women, Kari Brown in the first half and Michele Harmon in the second half. I marveled at how good I felt at the finish line...but I believe this energy was not a by-product of eating, drinking, and pacing, but came from working together with Michele. We were competing together, pushing each other to be better and stronger. We were laughing at times but also very serious about our race. It reminded me so much of my lacrosse days when I played with a team of strong, tough-as-nails women: we were all there with the same goal in mind, and we wouldn't settle for a loss, even when were were hurting. The energy, confidence, and support we gave one another is something only found in team sports...or so I thought. 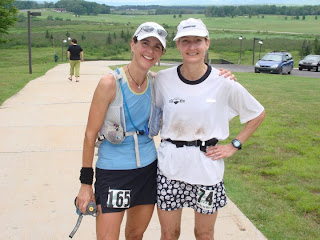 Thank you, Michele, for the opportunity to get closer to where I came from. It was a privilege to race with you!

Highland Sky results and photos are here.
Posted by Sophie Speidel at 8:52 AM 11 comments: 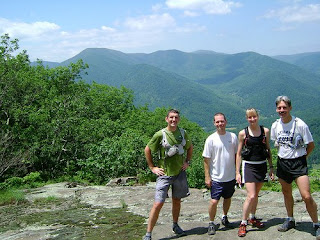 (Quatro, Marc, Michele and Joe atop the first ridge of Three Ridges with the Priest in the background)


This summer I hope to cover all my favorite trails while training for Grindstone 100 and then post the highlights here for folks to check out and discover on their own. Probably the most "bang for your buck" training run, the one that the big dogs like to train on for their speed records and western 100s, is the Priest and Three Ridges/Mauhar Loop. Last weekend I met up with a group of friends--Bill Gentry, Marc Griffin, Quatro Hubbard, Michele Harmon and Joe Clapper-- at the small parking area off Rte 56 east of Montebello, Virginia (next to the "Watch For Falling Rocks" sign) and we climbed the AT up the Priest, descended back down, and then crossed the road and the Tye River suspension bridge to ascend the AT up Three Ridges and continue on the blue blazed Mauhar Loop back to the car. On the way we took some excellent pics and ran into the Big Dog himself, David Horton, as he was training for his speed attempt of the Colorado Trail in July. Joe was training for his 3rd Hardrock 100 finish so we were happy to give him some company and take in this wonderful trail!

A few facts and helpful hints about this run:

1. Bring at least two 20 oz bottles for the 5-mile ascent up the Priest. It took us 1:30 to get to the shelter sign at a relaxed but consistent pace before descending hard back to the car. Total time for 10 miles: 2:45. You don't need your hydration pack for this climb unless that's all you have with you.

2. The Priest is the "warm-up" (at least in my mind) for the rest of the day. The big fun comes when climbing Three Ridges. The AT up the mountain has been re-routed through some glorious mountain laurel 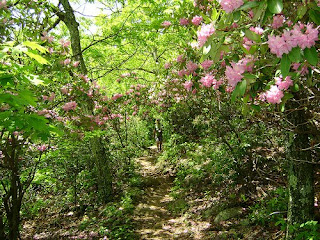 and the singletrack is awesome. Bring at least 100 ounces for this 14-mile lollipop. I brought one 20 oz hand held and a 70 oz Nathan pack and wished I had another bottle. I also packed lots of snacks--the climb is long and tough to the summit---took us exactly 2 hours and we ran all the flats and runnable ups. At the top of Three Ridges, one can descend back to the car or continue on the AT to the blue blazed Mauhar loop (named after the Maupin and Harper shelters along the route). 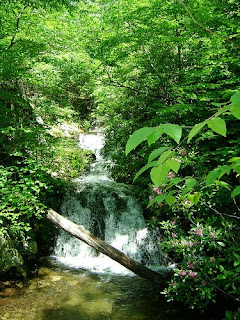 We prefer this route, as it takes us by glorious waterfalls (and drinkable water) and adds more climbing. WARNING: Be sure to bring a PATC map 12 with you for exact route finding, as it is tricky to find the Mauhar trail and easy to keep running towards the Blue Ridge Parkway to Reeds Gap).

3. The total climb for both mountains was over 13,000 feet as found here on Marc Griffin's GPS. The 13,000+ of climb for 23 miles is waaaayyyy more than the 8,000 feet for a 25 mile loop of the Wild Oak Trail (a perennial favorite to be profiled here in the future). Wow! That's what I call a big bang for my buck!

4. Besides the awesome views, wicked climbs and hammer-worthy single track, my favorite part of the run is always the dip in the Tye River after finishing Three Ridges. 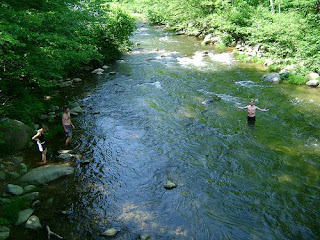 The day we ran the Tye was up high and very refreshing...a great place for an ice bath for the tired legs and cold beverage. You might get lucky as we did and meet some AT thru-hikers. The guys shared some trail magic with them and we all agreed that these climbs were beasts...but at least we didn't have to wear packs!!
Posted by Sophie Speidel at 9:54 PM 4 comments: