Thoughts on winning, losing, DNFing and finishing from the lacrosse field to the MMT finish line 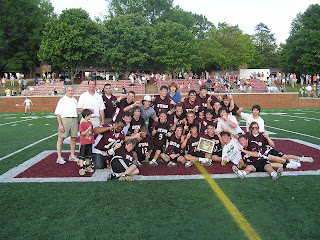 This past weekend I was fortunate to have been part of two intense and emotional sporting events. On Friday and Saturday, the third-seeded St. Anne's-Belfield boys lacrosse team (on which my son Chapin, number 21 in the newspaper pic, is a starting midfielder) was able to defeat the top two higher seeds en route to their first state championship since 2000. This group of kids had also won a state title in football this year, but for some reason this was a much more emotional game for me. It was a constant back-and-forth exchange of goals and it came down to a double-overtime, sudden death goal by Chape's teammate Harry Snyder to seal the win. As is my habit in these kind of situations, I burst into tears of joy, relief, and pride. The newspaper photo and article of the team pile-up at the end says it all... this group celebrated this win for each other, but mostly for their coaches, who had not won a state title in eight years. As a parent, I was thrilled to be part of the celebration and very relieved to have not had to deal with the disappointment that comes with losing a championship game!!

Almost immediately after the game, I was en route to Edinburgh aid station, mile 75 of the Massanutten Mountains Trail 100. It was only three short years ago that Rusty and Chapin crewed for me at MMT during my first 100-mile attempt. Chapin was 12 and he still likes to remind me what a whiner I was---it was a very humbling event for me and I think it was also good for him to see me weakened, doubting, and raw (a vast difference from the Mom I am on a normal day). With the support and encouragement of my husband, son, crew and pacer, I was able to finish MMT, but I often reflect back on that day and night in the woods and ask myself if I ultimately finished because I was determined to reach a goal, or was it because I was afraid to face feelings that come with DNFing? I would like to think that Chapin gleaned some good life lessons from watching me ultimately overcome my suffering, and perhaps it has helped him become the athlete and teammate he is today. 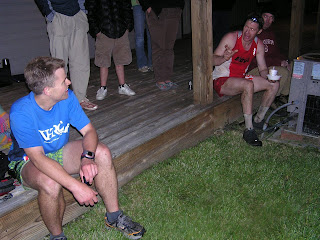 After a brief stop at Edinburgh, I headed to the MMT finish line to grab some sleep before starting my volunteer duties. Being on the "other side" this time was very cool. I was able to see Keith Knipling finish second overall in a PR, just nine minutes behind the winner, Todd Walker. Keith and Todd were battling each other all day, separated by mere minutes. The photo here is of Keith and Todd minutes after finishing, sharing stories and congratulating the other. What it doesn't show is the look that was on Keith's face just as he finished, reflecting his fatigue and disappointment in coming so close to winning, but it has been pointed out on other blogs and email lists how impressive Keith's improvement in the last 10 years has been, and I will say it again---what an inspiration to watch him methodically move his way up the race results each year after finishing DFL in 1999. I still like to refer folks to Keith's fascinating essay in Running Through The Wall about that 1999 finish---I believe it is one of the best reports from a newby of that MMT experience, anywhere.


The MMT finish line is a low key experience---no team pile-ups or laps around a track in a football stadium--but the emotion experienced by runners, pacers, crew, and family members is real and profound. On several occasions I was moved to tears as I watched the faces of the finishers. Some were exuberant, many were weeping, others were in pain and needed quiet space. In my role as a finish line greeter, I learned to read the subtle cues that told me whether the runner wanted me to intrude on his personal celebration and ask him (or her) what food and drink they would like...or whether to leave the runner alone to regroup. Emotions run very high at the finish, but also very low for those who DNF'd. Finishing MMT is the exclamation point to months and months of training through cold weather on rocky trails, sacrificing family time and sleep. Despite this focus, many very strong runners were not able to finish this year, and it was tough to see the disappointment in their eyes. Anyone who has DNF'd knows that empty feeling, as well as the process of mentally going over what went wrong, what needs to happen in training and with nutrition and foot care, and then the re-focus and anticipation on the next event.

I often quote this line to my girls lacrosse team: "winning is the easy part---it's how you handle losing and disappointment that reveals your true character." We know that running ultras reveals us to ourselves, and this is part of the appeal of the sport. Most of us will never "win" or "lose" an ultra, but we will have own personal victories and losses which will motivate us. Whether we are 15 or 45, "winning" will always feel sweet, but "losing" will ultimately give us something far more valuable.
Posted by Sophie Speidel at 9:53 AM 9 comments: