"The mountains shall bring peace to the people" -- Psalm 72:3

This year's Mountain Masochist 50 was intensely emotional and spiritual for me, as well as for many of Mike Broderick's friends in the VHTRC and ultrarunning family. Early Friday morning, the day before the race, Mike passed away with his wife Jill and sister Sue at his side. We were not expecting this---many of Mike's friends had visited him in the hospital just days before, and he was doing well despite dealing with pain. This was too swift, too sudden. I had been planning to run MMTR in honor of Mike, not in memory of Mike. 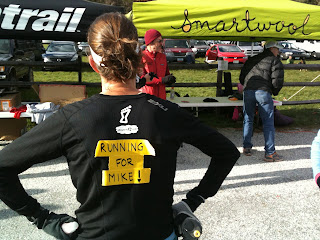 At the finish (photo by Rusty Speidel)

Keith Knipling graciously agreed to stand before the crowd assembled at the pre-race meal on Friday night to share the sad news and talk a bit about Mike and what he meant to us. Mike had finished three MMTRs, as well as Western States this past June in 26:53, and was a beloved marathon coach with the Montgomery County Road Runners Experienced Marathon training group. The ultra and road running community had come together to raise over $35,000 in his name for lung cancer research, and Mike was particularly pleased about this. In closing his comments, Keith said, "As you climb up Buck Mountain tomorrow, perhaps you may feel Mike giving you a push from behind..."

It was comforting to be with so many good friends that night. We were able to hug, cry, and talk about Mike surrounded by those who knew him well, those who had run, paced, crewed, and cheered for him. I was really looking forward to spending the entire day out in the mountains to reflect and remember. When my friend Meredith asked me, "Are you nervous about the race?" I immediately responded, "No, not at all." Masochist was my goal race of the year, the one I had trained for since July, yet I was oddly serene and peaceful as I laid out my clothes and my number. I knew what my race plan was, both literally (break 9:34, my PR for this course), and spiritually (run strong, fast, and free), and they were one and the same.

Howard Nippert coached me for this race and he did a great job of working on my speed and turnover, and getting me to the start line fresh and rested. As a result, I found myself running almost everything except the steepest climbs, and my heart rate was steady all day long. I have to admit that I was not sure how I would fare under Howard's "Less (mileage per week) is More" approach...but it obviously paid off as I felt awesome all day!

Howard prepared me very well, but Mike was my coach on race day. I thought about him every time I passed a place where I had crewed for him in 2004--the climb up to Parkway Gate, at Long Mountain Wayside, and in the Loop (where I ran against traffic to meet him halfway). Every time I got emotional, I would trip on a rock, and it became clear that this was Mike's sign for me to get a grip and race. When I tried to play my newly charged iPod, it wouldn't work, and this meant that I needed to run this race fully present and mindful of what I set out to do. Bill Gentry said to me the night before, "All will be revealed...". I just needed to pay attention. 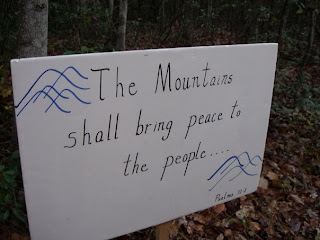 It was at about mile 29, during the climb up Buck Mountain, when I started to hear the music. The trail weaves in and out of hollows, and at first the notes were faint and barely there...and then all of a sudden, after a turn, they were clear as day. The music was the theme from "Rocky" and has been played at MMTR every year for the past 20 years in this exact same spot. As we climbed up the mountain, we were greeted with this inspirational tune and a succession of signs with biblical scripture written on them. Mike took a picture of one (above) when he was running MMTR in 2003. Mike had his pick of signs to photograph (there are at least five or six), but he chose to photograph this one. And now, it makes perfect sense why.

As the day progressed I found myself quite content to run as I felt, and I was on PR time. At the last aid station, four miles from the finish, I knew I would need to work it to get sub-9:24. Donna Utakis and I had been leap-frogging for the last 20 miles and this was awesome! Donna always makes me run an honest race, and I took her presence on the trail as yet another sign that Mike was there. (When Mike paced me at my first 100, the Massanutten Mountain Trails 100, I was trying to catch Donna, but Mike just kept telling me, "Run your own race. Let it come to you"). 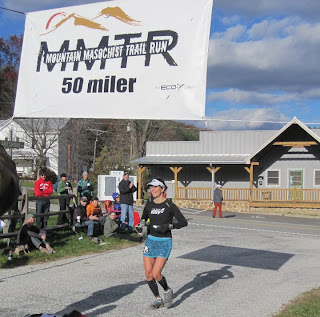 As we neared the finish line, Donna slowed to a walk and I took a look at my watch. It read 9:34:00. Donna encouraged me to go for it, so I ran hard for the last few yards. In heeding Mike's good advice, I had let the race come to me, and I felt fast, strong, and free...but mostly, I felt at peace. Mike and I had finished our 54-mile journey through the mountains together, and it was time to let his spirit move on.

Farewell, dear friend. I will miss you. 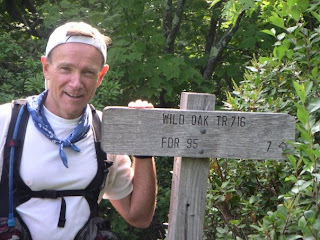 
"But they that wait upon the Lord shall renew their strength;
they shall mount up with wings as eagles; they shall run,
and not be weary; and they shall walk and not faint."

Mountain Masochist 50--a run for Mike 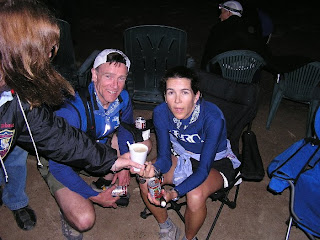 ** Please see the comments section for an update on this post**

Saturday will be my fourth Mountain Masochist 50 Mile Trail Race (MMTR), and without a doubt, it will be the most emotional. I am dedicating my race to my good friend and fellow Wahoo, Mike Broderick, who is fighting stage 4 lung cancer. Mike is a fellow VHTRC member and a popular marathon coach with the Montgomery County Experienced Marathon Training Program. Hundreds of his friends have contributed over $34,000 in Mikes' name to Team LeBrecque, a New York Marathon team raising funds and awareness for lung cancer.

The fact that Mike is so critically ill at all is unfathomable to me. Just four months ago, he finished Western States 100 in 26:53 in very hot conditions, looking and feeling great. Three months later, he was diagnosed with cancer. I am still in shock. I walk around all day going about my work, my training, and spending time with my family, but there is a cloud over my head that I can't shake. This is a guy who swears by a healthy lifestyle, helps others train for marathons and reach their goals so selflessly, and now he is fighting for his life. It just sucks.

Mike was the reason I finished my first 100, the Massanutten Mountain Trails 100 (MMT) in 2005. He was my coach, helped crew, and he paced me for the last 30 miles. As I wrote in my last post, he witnessed the great Sleepy/Sophie meltdown and got me running (er, death marching) to the finish line. I will never forget his patience, good humor, and "can do" attitude. 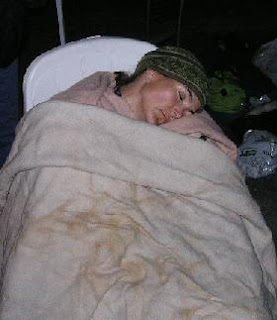 Mike and I met while on a training run on the Wild Oak Trail. He was training for Wasatch, and I was a newbie in the VHTRC. By the end of the 26 mile loop, we had discovered we were fellow University of Virginia alums and lovers of great acoustic music. (Mike is a Dead Head, and I am not, but we still like a lot of the same music, and he will always let me know when he and his wife Jill are coming to Charlottesville for a Hurricane Party with members of Johnny Sportcoat). He offered to help me prepare and pace me for MMT not too long after, and that was that. As it so often happens in ultrarunning, it took one long run and we were friends for life.

I wish Mike could be out there with me on those MMTR trails on Saturday. He has finished this race at least three times, and he hates The Loop as much as I do. When I am out there swearing at the rocks--and at this awful thing called cancer-- I will swear a little louder and harder for Mike. And I will say a prayer, too. 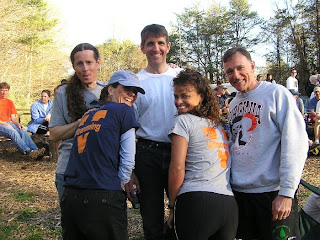