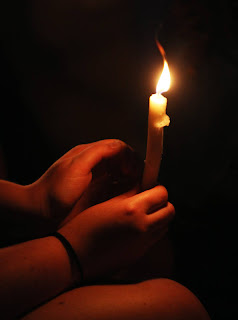 Before I was an ultrarunner, I was a lacrosse player. I picked up a stick (also known as a "crosse") during my freshman year in high school and instantly fell in love with the sport. I loved the speed, the ball movement, and the grace of the women's game, and spent hours throwing the ball against a wall perfecting my moves. Ultimately I ended up playing for four years at the University of Virginia and then for three years for the United States Women's Lacrosse Team. I represented the US in international tournaments after college and loved every minute of it.

As time went on, I branched out to other sports (triathlon, marathon, ultras) but lacrosse has always been my first love, and it defined my career choices. My first job out of college was coaching at an all-girl's private school in Baltimore. I was a graduate assistant coach at UVA while pursuing my masters degree in counseling, and I have been the JV girls coach at my school here in Charlottesville since 1995. I also coach a club team and my daughter's middle school team. My son is going to play in college next year for one of my dear friends who played on the men's team when I was on the women's team at UVA.

Lacrosse is a family. We are coaches, teachers, players, parents, umpires, and spectators. We love and respect the game, and one another. And, just like ultrarunning, we are a small, tight-knit community that is often misrepresented by the media.

So you can imagine the range of emotions that were flowing through my heart and mind last Monday, May 3, when we heard the news of Yeardley Love's death. As the school counselor, I had to hold myself together as I helped my students --who were coached by Yeardley at camp--come to terms with her murder. I also spent the week discussing the issues of domestic violence and substance abuse with my freshmen students. I read the damning media reports, cried with my colleagues and former UVA teammates, and attempted to coach my team and wrap up our season.

I was looking forward to coming to Capon Valley 50K on Saturday as a respite from the stress of the week, but instead found that I had no energy to run. I was happy to be there and see my friends, and grateful to be healthy and spending the day in the woods, but the emotional upheaval of the past week kept me from being able to run any faster than an easy trot. This was new to me---I never had come into a race unable to "race" when I was ready. At first I was frustrated, but then I realized that it just wasn't my day to race, so I spent the rest of the miles enjoying the great weather, listening to my sister's new album on my iPod, and thinking about Yeardley.

At the post run lunch, while everyone was talking about their great races, Tom Corris turned to me and said, "I am sorry about what happened in your neck of the woods last week." Such a simple comment, but so meaningful. I promptly burst into tears and bawled for a bit, and everyone at the table was understanding and supportive. Thanks, friends.

There's been much written about what happened to Yeardley. I won't use this post to go into all the details, but I do want to reinforce a plea that UVA President John Casteen made to those attending the candlelight vigil on Wednesday night: "Seek the support that belongs to you, because you belong to us." Yes, let's make sure we take care of one another.

Sometimes the tragedies of life intersect with our life on the trails. The cliche is true---we can try to run, but we cannot hide from these feelings. We can only accept them, embrace them, and then let them go. That's my plan for today. 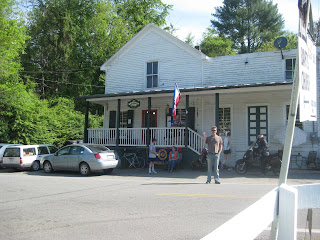 Rusty in front of the Batesville Store, home of Saturday night family-style buffets and great music

When I saw that the Batesville 10K was moved from its usual mid-May date to May 1, I decided it would be the perfect final tune-up tempo run for Capon Valley 50K next Saturday. The last time I ran the Batesville 10K was in 2001 when I was 39 and training for sprint triathlons. I remember that I suffered mightily for the first three uphill miles before hammering it home on the rolling hills in my slowest 10K time ever of 45-something. I also remember the low-key, small-town feel of this race, considered the toughest 10K in these parts.

Nine years later, the hills are still there and the wonderful low-key feel thankfully remains. The race kicks off Batesville Day, when the town, which is located 25 minutes south of Charlottesville, celebrates its heritage and hosts the race, a parade, a community fair, and a raucous gathering of food and friends at the Batesville Store later that evening.

The race attracts a small number of "old school" road runners from the Charlottesville Track Club, as well as first-timers, families, and moms with baby joggers. And "old school" it is: the starter welcomed us by saying, "Thanks for coming to our race. We don't have timing chips or mile splits, and the road will be open to cars, so be alert. Have fun. Go!" And with that, we were off. I settled into tempo/half marathon pace (7:30s) and let the front pack go. Bill Gentry was in that pack, hoping to run faster than last year's 43-something (he did---in 42-something). I was hoping to hold steady with 7:30s on the hills and in the heat, and then let it loose the last 3 miles a bit (I did---in 47-something, good for first Masters female). A perfect way to mix up the training and get in a quality run before Capon. 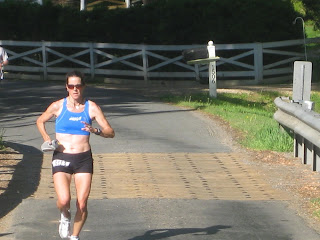 At mile 6, feeling pretty strong in the heat and after all the hills

Afterward, Bill and I did a few cool down miles exploring the town, and then met up with Rusty at the Batesville Store for Greenberry's coffee and granola. Rusty and his buddy Tom Goodrich play at the store on Saturday nights and we have heard the Honey Dew Drops there as well---a very funky, cool place to hear live music. 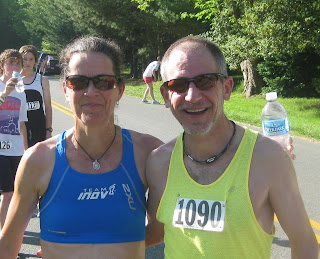 Bill Gentry and me, enjoying the post-run. Bill is gearing up for a 48-hour run in two weeks, after running his 10th Umstead 100 a month ago.

I have found that running a shorter race right before an ultra is a great way to get some leg speed going as well as break up the monotony of track and hill repeats. Batesville is a tough 10K that requires mental toughness, strong hill running, and smart pacing, all good skills to hone before a key race. I am looking forward to defending my 2009 win at Capon Valley and hanging out with the ultra gang once again!
Posted by Sophie Speidel at 2:57 PM 4 comments: