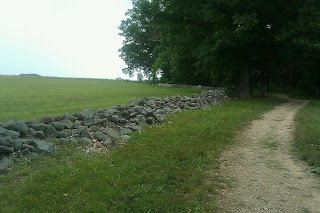 Yesterday I dropped off son #2 at a lacrosse recruiting camp at Gettysburg College. Since the middle of May, daughter and son have been either studying for exams, traveling to and from Richmond for lacrosse practice, or attending lacrosse tournaments and/or camps in Baltimore, Virginia Beach or Gettysburg. Mom has been either working, writing comments, or driving said children back and forth from their respective activities. And training has taken a well-timed back seat...but now it's time to get back at it!

After dropping off son #2 and making sure he and his roommate had plenty of Gatorade and water in the fridge, I was off. I had not run much in the month of June and was feeling itchy to do something new and cool...but I was also not psyched to run alone in the Catoctin Mountain woods or SNP on the way home...guess I just don't like looking over my shoulder for ax murderers or bears too much. But I was intrigued by the idea of running through the Gettysburg Battlefield (officially known as the "Gettysburg National Military Park") and was eager to get a history lesson along with my endorphin fix. I parked at the visitor's center, picked up a map, and noted the "trail" that wove in and out of the park---a horse trail used by the Gettysburg Equestrian Club and open to walkers and runners as well. Sweet!

Early on the the run I was overcome by the memorials to the various armies, infantries, and regiments. 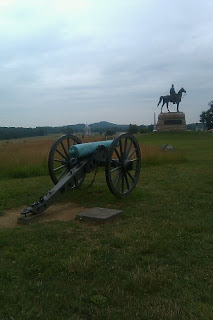 The weather was perfect---overcast, cool, and breezy. The gray sky added to the mystique of the day...I had heard about the "ghosts" of Gettysburg and it twas a bit spooky in places. The horse trail wound through fields and woods, and at one point passed a barn with a hole in the side of it---a hole caused by a Confederate cannon ball 150 years ago (according to the history marker in front). I ran by places with famous (to Civil War buffs) names such as Devils Den, Big Round Top, and Little Round Top. Nothing seems to have changed here, except for instead of tens of thousands of dead and wounded soldiers and animals, all that is left here are the (preserved) remains of houses and barns, many memorials, and the sound of the wind blowing across the fields. 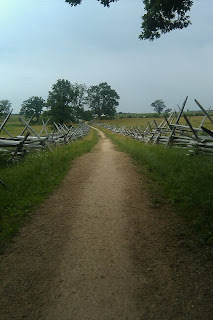 I ran the entire horse trail loop in about two hours, and saw one runner and one equestrienne. Both were polite and friendly. When I got back to the visitor center, I was rather pleased with my choice: instead of worrying about ax murderers and bears, I had plenty of reminders of the brave young men who died a century and a half ago... and I never felt alone.
Posted by Sophie Speidel at 5:04 PM 7 comments: 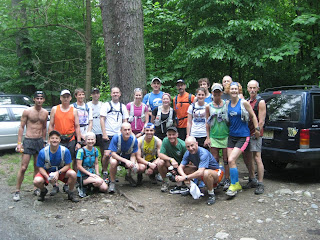 Harry Landers is my Charlottesville running buddy who is a Boston Marathon regular,an aspiring ultrarunner, and overall good guy. Last May he joined me and some friends for the awesome Rip-Rap/Wildcat Ridge circuit run, complete with the Super Secret Swimming Hole. This was his first long run in the mountains and he was a rock star! No whining, totally in control of his pace and cruising comfortably after 4+ hours...until he snagged his foot on the trail and took a tumble. No worries, though! Harry brushed it off with style and continued down the trail for the last hour of the run...with a broken collarbone. 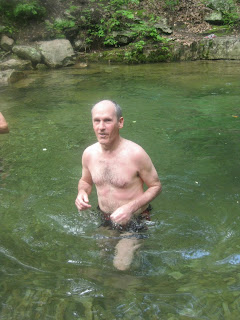 Of course, the fact that he didn't mention this little detail to anyone until he pulled his shirt off at the finish endeared himself to the ultraunners present---what a tough dude! So, I named the run after him.

Thanks to Facebook, the 2011 Harry Landers Special brought together VHTRC, CAT, IMTR, Richmond Road Runners, and Boston Bound members for a wonderful day in the mountains. I enjoyed watching so many of my friends from different places meet one another at the start, run together on the trails, and exchange contact information after the run. I loved that! I especially loved seeing my friend Linda run her first 21+ miler in the mountains with nary an issue. Woop! So proud of you, Linda!

I also must send a shout out to Kirstin and Tom Corris for braving the 30-foot rope swing into Blue Hole, the fave swimming hole of the UVA student crowd. They were like kids in a candy store, swinging from that rope into the cool waters of the Moormans River below. Very impressive---that is one high leap!!

The CATs, Sabrina, Kirstin, and Jenny wrote awesome reports. Thanks for joining us, everyone!
Posted by Sophie Speidel at 11:05 AM 3 comments: