With a little help from my friends...and the weather 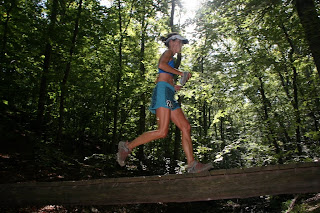 Last Saturday I ran the 18th annual VHTRC Women's Trail Half Marathon in Clifton, VA. Regular readers of my blog know that I went into the race wondering if I still had the leg speed to break 2:00 on a course where my PR (set in 2006) was 1:56:45. I also went into the race prepared to suffer, because that's what you do in the Women's Half.(the cool pic of me above is courtesy of Bobby Gill)

This event was not an ultra, but you would not know it by looking around. The course shared miles 26-39 of the famous Bull Run Run 50, also put on by the VHTRC. It was dry, rooty, and eroded after months of little rain and lots of horse traffic, and it had a few long climbs and descents that always require power-hiking at BRR. But at the WHM, you had to run them...it's only a half marathon, after all! The VHTRC volunteers at the aid stations were basically a "who's who" of the east coast ultrarunning community: Tom Corris, John Hayward, Keith Moore, Ed Demoney, Joe Clapper, Michele Harmon, Vicki Kendall, Jack Kurisky and James Moore, among others too numerous to mention. These folks have run many of the hardest 100 milers---from Hardrock to Massanutten to Badwater-- and their experience was on display every time I came through an aid station. My favorite moment was watching Jack Kurisky sprint toward me at the final aid station asking if he could fill up my bottle, treating me like a total rock star, knowing I was racing the clock...but I had to blow by him with a quick, "no, thanks!" as the clock was ticking! Thanks anyway, Jack! 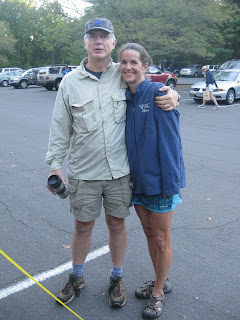 But, I am getting ahead of myself. Back to the start. I went into the race hoping for cool weather and was not disappointed. It was so chilly at the start that I was wearing a fleece coat just before the gun went off (that's me with Anstr Davidson on the right). The men of the VHTRC actually start the race by singing "Happy Trails" to us, and then we are off! I started out running with former WHM winner Heather Schaffer, as well as Jen "Ironman" Ragone and Ragan Petrie. I knew Heather, who holds the Catoctin 50K CR, would most likely crush the course, and I was right. She cruised to a comfortable two minute win over the next woman, after starting slow with us and picking her way through the pack. Jen, despite her sandbagging and comments about how much she hates suffering on this course, ran for fifth and Ragan paced herself well for ninth. I was happy to tuck in behind Ragan as I know she would start out easy, and I tried to stay in contact with her during the race. When I saw Tom Corris as I was coming out of the Do Loop, he commented that I was looking good and moving well---which is hardly ever the case when one comes out of the Do Loop--and this was my first inkling that I had a potential PR day ahead of me.

However, you would never know by looking at the race photos that I was having a good day. Aaron Schwartzbard took these pics of (in order, l-r) Ragan, Heather and me...which runner looks like she is suffering the most? 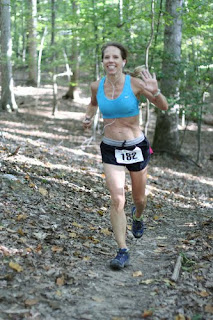 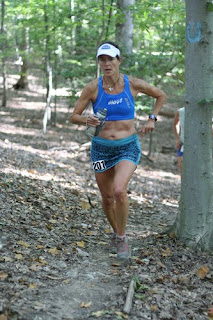 Despite the look on my face, I was actually pleased that I was feeling good. But I kept thinking, "hmmm...this is not good. If I feel this good in this race, it must mean that I'm not working hard enough." Sheesh. So I kept at it and focused on high turnover, efficient form, low heart rate and eating and drinking. At the last aid station I knew I was within reach of breaking my PR, and I tried to run up the big hills as much as I could. The women coming towards me were unbelievably supportive, positive, and friendly, and I tried to use their positive vibe to pull me along. As I neared the finish I glanced at my watch and saw that it was not going to happen...but I came damn close. Eleven seconds off for a 1:56:56, 11th overall and first in 45-49!

Needless to say, I am very excited that I can still work it at 47 like I used to at 43, and after reading all the supportive comments from you guys and gals out there (you know who you are!), I am very excited to go for the sub-9:34 Masochist course PR. Yes, cool weather will most definitely play a role...along with the encouragement of my friends. Thanks, everyone. Here's to growing older and going faster!

Women's Half Marathon photos, results and report are here.

A side note...after many years of lusting after the Bull Run run 50 embroidered blankets that are awarded to the winning teams---and never running for a winning team--I finally got my blankey for winning the 45-49 age group at the WHM. Here I am with super Race Director Mel Saraniero at the finish, clutching my blankey. Gotta love the schwag at VHTRC races! Thanks, Mel, and all the awesome volunteers for another unforgettable event! 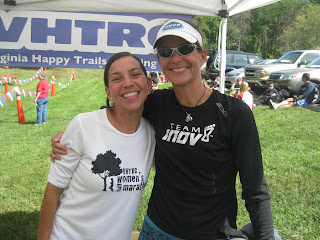 Posted by Sophie Speidel at 9:14 AM 7 comments:

Time for the Anaerobic Sufferfest! 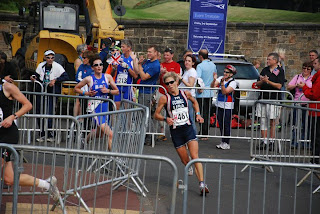 My friend Kirstin reminded me the other day that this was my favorite way to describe the VHTRC Women's Half Marathon trail race. I am going back to run the "anaerobic sufferfest" on Saturday after taking a few years away to train for Grindstone 100, and I am really excited. As I wrote in my 2007 post, the WHM was my very first VHTRC event back in 2002, so this is an anniversary of sorts. Eights years of hanging out with the VHTRC! I am one lucky ultrarunner. I am also excited to see what I can do for a shorter distance on the trails---have I become a slow slogger after two years of 100 miler training, or do I still have some speed in these old legs?

Howard has met set up nicely this week with a taper (of sorts) and then tacking on some more miles after the race to keep my weekly mileage intact. After 8 weeks of following Howard's plan for MMTR, I am feeling fit, light on my feet due to the quick turnover intervals, and prepared to suffer for 2 hours at my anaerobic threshold as a result of weekly tempo runs. My PR on the current WHM course is 1:56:45 set in 2006. I am not gunning for a PR given the weather forecast of hot and humid, but I would like to break 2:00. I will take it out easy and see what I have left in the tank after the first hour. Regardless of the outcome, it will be a great day in the woods celebrating my fitness and my eight year connection to my awesome running club. Wooo-hooo!

What's also fun about having the WHM in my training cycle is that it has forced me to start thinking realistically about my goals for the next few races coming up. As a 47-year-old, I know my course PR days are numbered (though it took me 5 years to get a course PR at Hellgate in 2009, so go figure). Is it realistic to think that I can still score course PRs? I would like to break my course PR of 9:34 at MMTR in November, but I know that the cosmos must be aligned just right for that to happen: weather, trail conditions, work stress, family stress, fitness, nutrition...all of these factors will play a huge role in determining the outcome. Part of the adventure is letting it all play out, and I am excited to see what happens!

A few shout outs to two women over 40 who are making things happen: My friend Eliza O'Connell (above), who almost beat the entire field at the Terrapin Mountain Trail Half marathon, finished 10th and second American woman in her 40-44 age group at the World Duathlon Championships in Edinburgh, Scotland last weekend. Eliza ran a 40-flat 10k, followed by a 40K bike in 1:33, followed by a 20-flat 5K. Talk about an anaerobic sufferfest! What's even cooler is that she is a mother of three darling daughters under the age of 10, and that she just started racing duathlons a year ago! Way to go Eliza---your focus, hard work, and "laying it all out there" are an inspiration to so many of us!

I am also really inspired by Ronda's blog post from this morning. Ronda always writes interesting and energizing posts that get me fired up and thinking about motherhood, balance, and how I train and race. After reading about her goals for 2011, I may have to dust off my old Specialized mountain bike for the cool fall temperatures after MMTR is in the books. As for 2011...Bill and I are already scheming about a stage run in the SNP, and I am thinking about adding a mountain bike race to the mix. Thanks for the push, Ronda!
Posted by Sophie Speidel at 8:14 AM 6 comments: