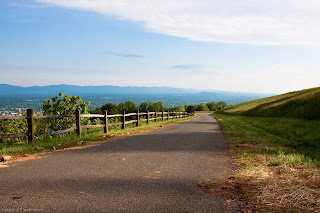 Saturday I ran the Montalto Challenge 5K. I also ran it in 2009, which was the first year of the event. I love running hills and mountains and this is one big mother: 5K of anaerobic suffering and roughly 1300 feet of climb with a sweeping view of Monticello and Charlottesville at the finish line. All proceeds from the race benefit the Monticello-Saunders trail systems, which make the suffering all worthwhile.

My friend Andy Jones-Wilkins was in town getting ready for his new job as Head of School at Tandem Friends. He is also in the middle of training for his favorite race, Western States 100. AJW has finished the last six WS100 in the top-10, which means he is guaranteed entry for the following year. This also means his training can't suffer when he is traveling to the east coast, so he asked me to set up some training runs with some big climbing. Montalto fit the bill for Saturday, and Sunday we headed south to the Priest and Three Ridges, "the" place to get your climbing legs and trash your quads for any mountain 100.

The weather was gorgeous for a trip up the mountain...clear skies, cool 50 degree temps, and light winds. Eliza, Andy, Harry and I warmed up with an easy jaunt up the Saunders Trail, to check out the first mile of the race. The grade here was gentle, and we had fun catching up and sandbagging our race goals. Eliza was defending her "Queen of the Mountain" title that she earned last year as the first woman, and Kristen was coming back from a stress fracture. Harry was recovering from Boston, and Andy was hoping to get in a solid climb. My excuse/story? I was two weeks out of Promise Land and just hoping to stay close to my 2009 time of 26:35.

We also admired the stencils that were set every half mile up the mountain to the finish line: 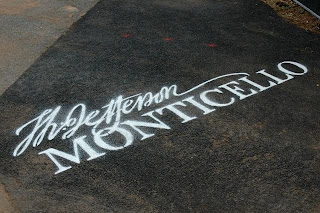 Once the race began, I was able to click off the first mile in a comfortable 7:20, my tempo pace on "flat" roads. Eliza and Andy were long gone, Harry was just behind me and Kristen was just ahead. We stayed like this until the Saunders Trail ended and we turned up Montalto. Then, BOOM. The grade was at least 12%, maybe more. Walking was required. But everyone around me was walking, so at least I wasn't alone. Since power hiking in ultras is my strength, I was able to make good time alternating hiking and running. Kristen (who is always about 15 seconds ahead of me in a "regular" 5K) was about five seconds up until the last switchback. I caught her here and managed to keep running instead of walking, even though I was suffering. Andy, who finished four minutes ahead of me as fourth overall, was standing at the top yelling "PUSH!" so, I did. I also gasped to the nice volunteer fire fighter who was racing next to me, "Pull me in..." and he did. 26:40 and second female. Thanks, Andy, Thanks, Fireman. 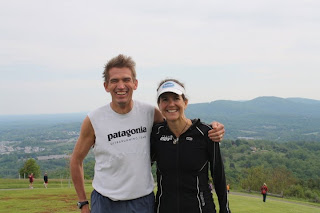 Kristen was seconds behind me and Harry just after her, and we stayed on to cheer on the 230+ runners and walkers who made the trek. Wow! What an awesome event. It was so cool to finish the race looking down onto Monticello. After admiring the views, and taking photos, it was time to run back down the mountain and explore the rest of the beautiful trails that make up Carter's Mountain and Secluded Farm. We were able to get in around ten miles total before heading to Greenberry's and the rest of our Saturday.

4:30 am Sunday, Andy and I headed down to Montebello to meet Jeremy, Kevin, Marlin, Jenny, Drew and Nick for a trip up Three Ridges/Mauhar and then the Priest. We met the gang at 6:00am in a light rain, and after introductions and plans for meeting up after the run, the "Fast Guys" (Andy, Jeremy, Kevin, Drew and Nick) took off running up the AT towards Three Ridges. Marlin and I were quite content to hang out and take it easy, as we were coming off a full spring race calendar and very happy to not have to run fast! The Fast Guys made it look ridiculously easy as they ran uphill--Jenny (who caught us later) said she thought they were riding mountain bikes, they were hammering!

The Three Ridges/Mauher lollipop is a favorite run for many reasons. It takes me about four hours at an easy pace to run the 14 miles of the loop, and Marlin, Jenny and I did exactly that. We had a great time catching up on Jenny's recovery from her Camino de Santiago adventure, Marlin's summer Grand Canyon plans, and enjoying the beautiful wildflowers along the trail. Each time I run this loop, I discover something new...this time, it was the pretty white and purple flowers that we never see any other time of the year. 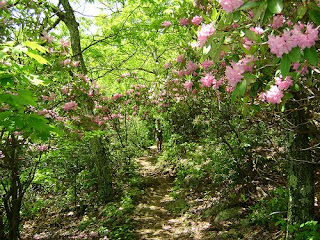 The Fast Guys ended up running Three Ridges/Mauhar in 2:40 and were bombing down the Priest twenty minutes after we had started climbing up. Whew! Marlin and Jenny kept climbing but Andy and I needed to get back to C'ville, so I peeled off and headed back down. It was a full 24 mile run for the Fast Guys and a solid 16 mile outing for me...and a perfect Mother's Day gift. My first back-to-back in a while, great climbing, and good friends, old and new.
Posted by Sophie Speidel at 2:09 PM 6 comments: