Yesterday was the annual Catherine's Fat Ass 50K, which is run on parts of the MMT 100 course as well as on lesser known trails and gravel roads in the southern Massanutten mountains. "Cat's" is a favorite summer training run for the VHTRC folks and friends. You get a free, fully supported run and a festive party in the parking lot organized by Jeff Reed with the help of many volunteers. For me, it is a fun reunion of friends and a great training run in the "cooler" environs of the mountains.

"Cooler" is a relative term, of course. Keith Knipling told me that the thermometer at his house in Alexandria read 90 degrees at 5:00am. Jeff told the runners that it was "cooler" on Friday as he was marking trail than it was last year at the same time, when Cat's was held in 105 degree temps. With heat advisory warnings blasting the print media and airwaves, and knowing that running a 50K in this heat and humidity was basically stupid, I was curious to find out how I could minimize any heat-related issues. I had read about an Australian study that proposed a simple method for increasing running endurance on a hot day: drinking a slushie (or, in 7-11 parlance, a Slurpee). So, as I drove the Charlottesville gang up to the mountains yesterday, we stopped off at the Elkton 7-11 where I got a large Fanta grape Slurpee. No one else in the car was interested in participating in my little experiment, so I had a control group of one. Not very scientific. Whatever.

We arrived at Cat's with plenty of time to meet and greet in the parking lot. I was actually a little chilly after slurping down the Slurpee, and gathered my frozen bottle of Perp and hydration pack for the run. Given the heat, I decided to run my version of Cat's again this year, which was a 25-ish mile version of the course that included the pink trail, which is my favorite. Every aid station had plenty of ice and water, and we had special trail magic in the form of Jack Kurisky's ice pops and Dave Yeakel's electric fan and watermelon. So as I ran along, I felt surprisingly cool and comfortable. We had lots of shade and a nice breeze, and took a lovely dip in Cub Run before heading up the Purple Trail. 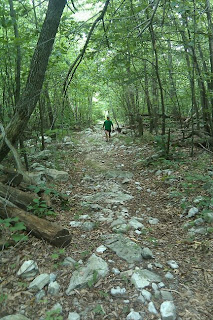 The Purple Trail is the stuff of legend among the VHTRC. It has claimed many victims with its long, exposed climbs, dead air in the hollows, lack of water, and never-ending switchbacks amidst the rocks. It came at about 18 miles and 4 hours into the run for us, so we all needed to tank up well. I started the climb with Gary Knipling, and new friends Jim and Chris after indulging in ice cold water provided by trail angels at the trailhead. I was climbing well and feeling really good after the dip in the river, and loved bombing down the pink trail. Hmmm...was the Slurpee making a difference in my attitude? Perhaps. I do know that I totally suck in the heat but was moving well. The overcast skies and taking the time to get wet and hydrate well at each AS certainly helped, and knowing that the party was waiting in the parking lot didn't hurt either... 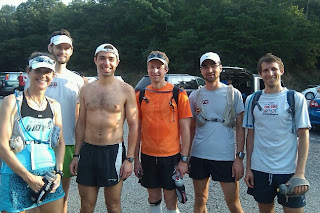 The fast guys in the Charlottesville gang are making a name for themselves...despite the heat, Drew, Mike, and Joey all finished the 50K in the 5:30s or faster. It was a great day in the mountains!
Posted by Sophie Speidel at 2:18 PM 10 comments: